3: Cosmic Map: How many Universes?

The Planetary map section laid out here inevitably leads to “out of this world” questions. Sometimes they are “like in our world” answers, offering clear explanations derived from scientific observations of earth.

However, as sci-fi and fantasy have always openly suggested, other worlds, planets, or continuums where things operate differently, or at least dissimilar enough to require explaining, would almost certainly exist in a vast space such as a universe evidently contains. 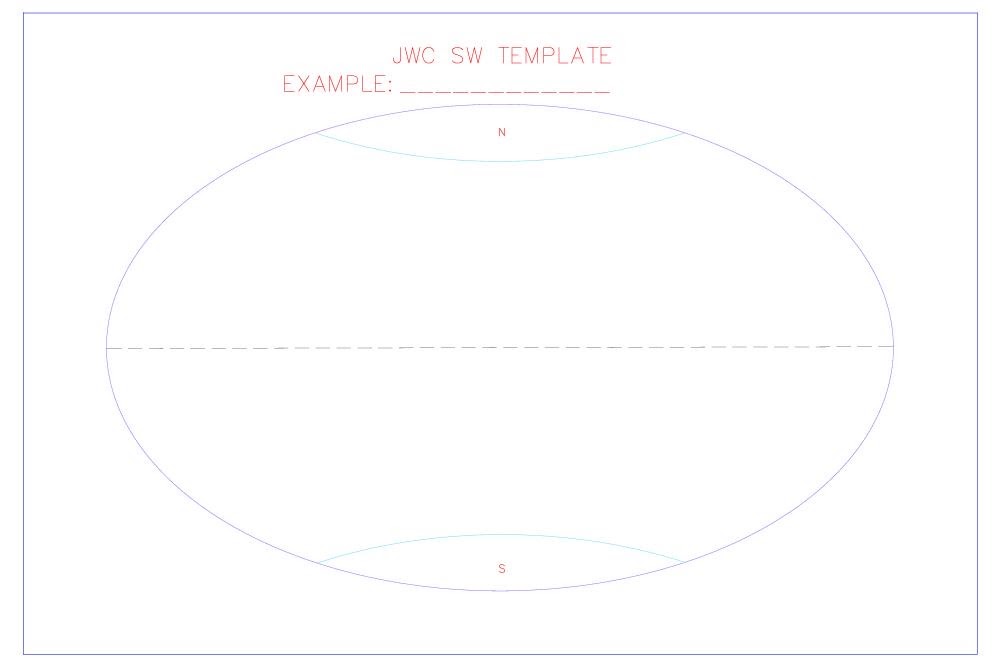 Feel free to use it to make your own secondary world.

The goal behind this experiment is to take an already vibrant world written on the page and help to fully define it by imposing a global horizon. (Planetary conditions in spacetime)

Be sure to align the polar and equatorial regions before drawing the continental/oceanic delineations, so that geology/oceanology has a deep time access point.

*note - You need to establish the planetary surface conditions and overall climate for each region to ensure that the story you wish to tell can take place there.

Once you have your secondary world drawn and its lands and seas have been passed over, then the goal is to populate that world with ages of time and locations of mythic peoples to live and die in. (Future posts to follow on this)

If you already have a fictitious world in which you write, bring what data you have to your own example.

Don’t have a fictions world yet?

Here are a few examples of JWC’s Secondary World exercise.

Have fun exploring the limitless possibilities…

The story setting for Malathoria vol 1

by Richard Andrew Olkusz and David Michael Lockwood, jr., for sale on Kindle. 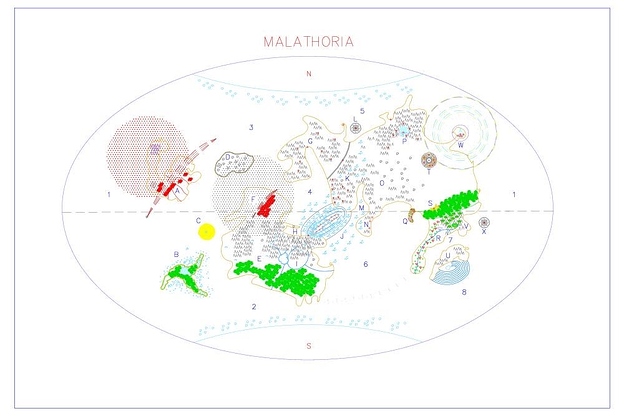 As you zoom in to check out the planetology, the virtual world space should offer inspirational flames to your already flickering creative expression. That’s the first fruits of such an exercise, a look into another secondary world drawing your muse into those details about your own established project.

If you have maps and other logistical data about a story setting, then this task will be easier, but just as important to take your fantasy, sci-fi, space opera, or inter-dimensional story to the beast level of immersive interactivity. Is it necessary? One would think that necessity lays an endless refinement of the creative process, to it’s furthering and greatness, so that a muse and project may be properly honored.

Malathoria is a troubled planet, the result of a catastrophe concerning the Zoetic terraforming device that crashed upon its surface. This is evidenced on the map by the large sprawl of blue crystal. (resembling glaciers but at the equator)

Please check out the book and use the above map to orient yourself with its characters as they travel during the story. This should also stimulate your muse and or inspiration, allowing for the leap into secondary world simulation and so a rising need to entertain the exercise. 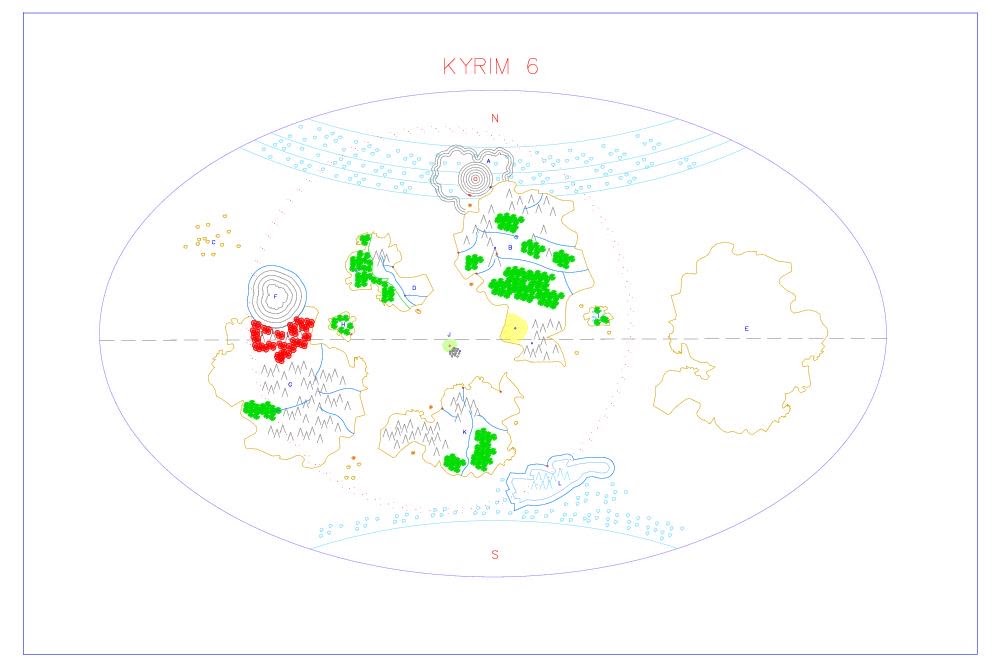 Kyrim6 is a sentient planet with a populous of created organisms which help to do it’s will and police it’s surface. Acting as part of the planetary immune system as well as providing its central intelligence with data recon of surface functions, these “Kyroges” revere their creator/sustainer as an ecological deification. The planet’s “Core” is alive and speaks with its Kyroges, a multi-limbed race with which it holds a special communion. With conditions like this, it is possible to tell a dual story featuring the whole world’s perspective running parallel with the viewpoint of the Kyroges. I plan on exploring this unique storytelling in the future Blovel project of the same name.

Hereafter is the Primary example for this 1-5-10 exercise and will be carried through all 10 steps. Use the fullness of the following posts to transpose imaginings of Malathoria and Kyrim6, and by this desire for your own Secondary World build should be already on the move in your unconscious processes. Give it a try and see if this JWC Secondary World experiment doesn’t up your conceptual game. 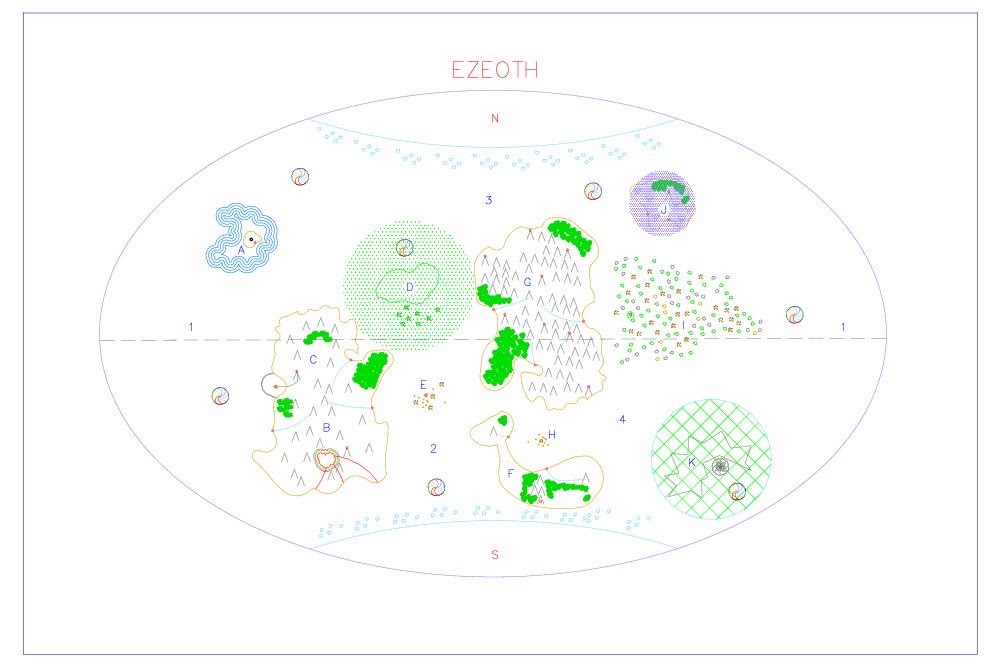 Reach out to JWC Secondary World to submit or to go over possible workshop. Use the template to create your own secondary world, to improve your own projects and follow us on a creative journey in the making.